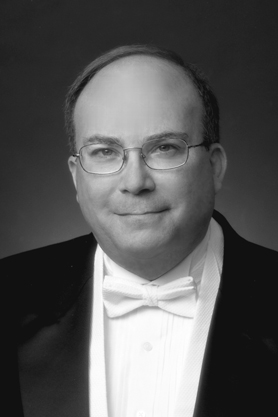 Lewis J. Buckley was born in Columbus, Ohio, but considers himself a native of Florida, the state in which he grew up. He earned his undergraduate degree from the Eastman School of Music and his Master’s degree from Connecticut College. While at Eastman, he earned the Performer’s Certificate for outstanding performance on the trumpet, and he studied conducting and composition.

He enlisted into the U. S. Coast Guard Band in 1969, where he served as Principal Trumpet and Trumpet Soloist for six years. Then, in 1975, he became the Coast Guard Band’s fifth Director at age 27, a post he held for over 29 years, serving longer as the conductor of one band than any other conductor in the history of American military music.

Under his baton, the Coast Guard Band became a noted touring organization, released some 20 recordings, and aired more taped and live concert broadcasts on National Public Radio than any other wind band, military or civilian, in the United States.

In 2003, the MSO Board named him Artistic Director and Conductor of the orchestra, effective the 2004-2005 season.

A sought-after clinician, Buckley works often with student groups at all levels from middle schools to colleges.

He continues to compose, arrange, and publish prolifically, bringing to his work the knowledge earned in over 30 years on the podium. He writes exceptional solo and ensemble works for various concert media, and his music is performed widely. He receives frequent commissions to both compose and arrange. Buckley also conducts the Metropolitan Wind Symphony, which performs in Lexington, Massachusetts.