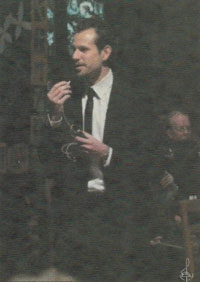 “This is a musical work so big it’s hard for anyone to perform nowadays,” said Manchester Symphony member Pete Bradley, “and we’re bringing it to Manchester.”

As a young boy, Mahler was fascinated by every bit of music he heard — bird songs, chants in the synagogue, the post horns played to announce the arrival of mail carriages. His first symphony, which he composed while still in his 20s, incorporates many of these as influences.

The symphony starts quietly, with an offstage trumpet fanfare that hints at what’s to come, through themes based on traditional dances and folk tunes, ending in a thunderous finale. At one point the music directs the seven French horns to stand up to get the largest possible sound.

Hodge enthusiastically describes the work’s vast scale. He says, “One of my favorite anecdotes about Mahler is the time he visited Niagara Falls — he said, ‘Finally! A true Fortissimo!’ This is the kind of sound he’s going after in his Titan Symphony.”

Hodge became the music director  of  the  Connecticut  Valley Symphony in 2012 and orchestra music director of the Manchester group a year later. As he became acquainted with both, he began to realize some unique opportunities.

“The Mahler is the perfect piece for a collaboration between two orchestras,” says Hodge. “With eight horns, four trumpets, and over 15 different woodwind parts, it is a true tour de force.”

Also on the program is Vaughan-Williams’s Fantasia on a Theme by Thomas Tallis, which takes advantage of the expanded string section of the two orchestras. The piece is arranged for a full-sized string orchestra, plus a smaller chamber orchestra and a string quartet.

Concertgoers are able to see, as well as hear, the interplay of the different groups. As Hodge explains, “We have the chamber ensemble standing behind the main orchestra to make a clear distinction between the two groups, and Vaughan Williams singles them out several times throughout the piece, giving those sections an ethereal quality.”